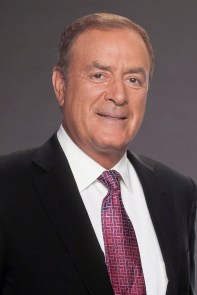 Iconic broadcaster Al Michaels, who joined NBC Sports in 2006 as the play-by-play voice of Sunday Night Football and played an integral role in the show becoming among the most-watched and most-honored shows in television history, was named to an emeritus role by NBC Sports Chairman Pete Bevacqua in May 2022. In this role, he will broadcast and contribute across NBC Sports’ high-profile properties, including the NFL Playoffs and the Olympics.

One of the most renowned sports broadcasters of all time and the commentator called “TV’s best play-by-play announcer” by the Associated Press, Michaels in Sept. 2022 begins his record 37th campaign as NFL primetime play-by-play announcer calling Amazon Prime Video’s Thursday Night Football.

Michaels spent the past 16 seasons as the voice of NBC’s Sunday Night Football.

In December 2020, Michaels was honored with the 2021 Ford C. Frick Award for excellence in broadcasting by the National Baseball Hall of Fame and Museum. Michaels is one of only five distinguished broadcasters to be recognized with the baseball honor and the Pro Football Hall of Fame’s Pete Rozelle Award (Dick Enberg, Lindsey Nelson, Jack Buck, and Curt Gowdy).

On February 13, 2022, Michaels called Super Bowl LVI on NBC and Peacock – his record 11th Super Bowl in the booth – marking the most play-by-play assignments for the event by a television commentator, joining former CBS and FOX announcer Pat Summerall (11).

In 2016, Michaels also served as the play-by-play voice of the NBC/NFL Network Thursday Night Football series, which ranked as primetime’s #2 show in the 2016-17 TV season.

In February 2015 in Arizona, Michaels called Super Bowl XLIX – the thrilling four-point New England Patriots victory over the Seattle Seahawks which still ranks as the most-watched show in U.S. TV history (average of 114.4 million viewers). Michaels’ previous Super Bowl — Super Bowl XLVI, which Michaels called with Collinsworth on NBC in February 2012 — was the most-viewed program in U.S. television history at the time.

At the 2016 Rio Olympics, Michaels served a host on NBC’s daytime coverage. He hosted NBCSN’s weekday afternoon and NBC’s weekend daytime coverage of the 2014 Olympic Winter Games in Sochi, and served in the same role for NBC at the 2012 Olympic Games in London, the most-watched event in U.S. television history, and the 2010 Olympic Winter Games in Vancouver. In 2015, Michaels served as host of the first events in the “PBC on NBC” boxing series.

Michaels’ autobiography, You Can’t Make This Up (released Nov. 18, 2014), was for two months on the New York Times best-seller list for hard-cover, non-fiction titles.

One of television’s most respected journalists, Michaels has covered more major sports events than any sportscaster, including 20 years as the play-by-play voice of Monday Night Football. He is the only commentator to call the Super Bowl, World Series, NBA Finals and host the Stanley Cup Final for network television. In addition, Michaels called the classic 1985 championship boxing match between Thomas “Hit Man” Hearns and “Marvelous” Marvin Hagler.

Among his many accolades, Michaels has captured eight Emmy Awards – seven for Outstanding Sports Personality – Play-by-Play and one in 2011 for the Lifetime Achievement Award, and has three times (1980, 1983 and 1986) received the NSSA Award from the National Sportscasters and Sportswriters Association; he was inducted into the NSSA Hall of Fame in 1998. Michaels was named Sportscaster of the Year in 1996 by the American Sportscasters Association, and, in 1991, he was named Sportscaster of the Year by the Washington Journalism Review. In 2004, he was honored with a star on the Hollywood Walk of Fame.

Michaels received three major industry honors in 2013. First, he was inducted into the Pro Football Hall of Fame with the prestigious Pete Rozelle Radio & Television Award, which distinguishes long-time exceptional contributions to radio and television in professional football. Michaels was then inducted into the Television Academy Hall of Fame by the National Academy of Television Arts and Sciences, which annually recognizes television’s most distinguished “innovators and icons.” Finally, in December 2013, the Sports Broadcasting Hall of Fame recognized Michaels for his “excellence and lifetime achievement,” and he was inducted as a member of its 2013 Hall of Fame Class.

Michaels garnered his first Sportscaster of the Year award in 1980, the year he made his memorable call, “Do you believe in miracles? Yes!” on the U.S. men’s hockey team’s dramatic upset victory over the USSR at the Lake Placid Winter Olympics. His reputation for Olympic acumen grew with his coverage of figure skating and hockey at the 1984 Winter Games in Sarajevo, and track & field and road cycling at the Summer Games in Los Angeles. He also called hockey during the 1988 Calgary Winter Olympic Games.

Regarded as one of the best baseball announcers of all time, Michaels was ABC’s lead baseball play-by-play announcer during the network’s coverage of Major League Baseball. He has also earned praise as a journalist and became just the second sportscaster in history to receive a News Emmy nomination for his coverage of the San Francisco earthquake during the 1989 World Series.