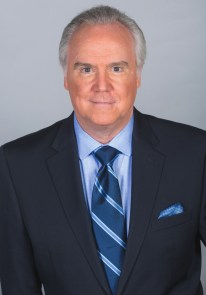 Al Koken is the reporter for Washington Capitals games on NBC Sports Washington and serves as the host of the network’s pre- and post-game shows, Capitals Pregame Live and Capitals Postgame Live. He is also a play-by-play announcer for the network’s coverage of college basketball.

In addition to his work at NBC Sports, Koken previously served as a sports anchor and reporter for Washington’s WTTG-TV and WUSA-TV. He joined the WTTG sports department in 1981, his first position in television, and worked with WUSA in the late 1980’s. He also hosted a locally syndicated Redskins show, Ball Hogs, and a nationally syndicated show, The Sports Edge, as well as work with ESPN and Fox Sports.

Koken has also held prominent roles covering sports for radio and print organizations during a career that began in 1975. He spent more than a decade as co-host of The John Thompson Show on ESPN 980 and hosted a nightly sports radio call-in show, Sports Talk, for two-and-a-half years on WTOP. He also spent more than five years covering sports as a print journalist for United Press International.

A native of St. Louis, Koken is a graduate of American University.