Fans Can Vote for Their Most Memorable NBC SNF Moment of Past Decade on @SNFonNBC Instagram Story with Special SNF Bracket Selected by Al, Cris & Michele; Plus Bracket With Highlights on @SNFonNBC on Twitter and @SNFonNBC on Facebook

Drew Brees, the Newest Member of Football Night in America, on His Record Breaking SNF Moment

STAMFORD, Conn. – May 17, 2021 – With NBC’s Sunday Night Football ranking as primetime TV’s #1 show for an unprecedented 10th consecutive year as the fall-spring TV season officially concludes this week, the on-air team has selected 16 of the most memorable moments in SNF’s record decade-long run.

Those moments are seeded 1 (Super Bowl XLIX) through 16 (49ers-Seahawks “NFC West Championship Game,” 2019 Week 17) in a bracket on Sunday Night Football social media platforms, allowing for fans to vote (beginning tomorrow) on their favorite on @SNFonNBC Instagram story, while also checking out the bracket with video highlights on @SNFonNBC on Twitter and @SNFonNBC on Facebook.

Following are the 16 memorable moments (regular and postseason) from the NBC SNF package from the 2011-20 seasons, as selected by play-by-play voice Al Michaels, analyst Cris Collinsworth, sideline reporter Michele Tafoya, executive producer Fred Gaudelli, and director Drew Esocoff – all of whom have been with SNF throughout the record run.

“A Decade of Sunday N#1ghts” matchups (full descriptions at bottom) 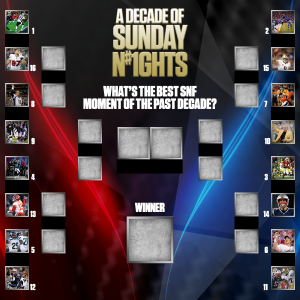 Each member of the SNF team offered a comment on a memorable moment from the SNF package over the past decade.

Al Michaels (Super Bowl LII; A “Philly Special”; Eagles-Patriots): “A true classic. Nick Foles coming off the bench in December when Carson Wentz sustained a season-ending injury, then leading the Eagles to their first NFL title since 1960. A game that featured Foles catching a touchdown pass from Trey Burton on the now immortalized ‘Philly Special.’ The Patriots taking a one-point lead in the fourth quarter only to see Foles lead the Eagles down the field to retake the lead. Tom Brady throwing for 505 yards! Brandon Graham strip-sacking Brady in the waning moments only to see Brady get the ball back and the game ending on a broken-up Hail Mary in the end zone. 74 total points. 1151 yards of offense. Sixty minutes of back-and-forth nonstop tension. Apart from that, nothing much.”

Cris Collinsworth (Super Bowl XLIX; Seahawks vs. Patriots): “Our three Super Bowls were all amazing, but I will never get over Malcom Butler’s interception in Super Bowl XLIX. To see the trophy stolen out of Seattle’s hands by one of the most unlikely heroes in Super Bowl history was simply stunning. Al’s immediate call of that interception was equally incredible. I had no idea who had the ball coming out of that collision.”

Michele Tafoya (2015 NFC Wild Card in 6-below zero temperatures; Seahawks vs. Vikings): “After seeing the game-day forecast, I spent the week dreading being on the sidelines. Then I decided to embrace it. But the cold was more brutal than advertised. The Vikings defense played extraordinarily tough. It was a remarkable performance. Then, Blair Walsh missed a chip shot FG which would have given Minnesota the win. Collinsworth likened it to missing a two-foot putt to win The Masters. And I will never forget the faces of the Vikings as they left the field. They were gutted. They were sick.”

Fred Gaudelli (2015 NFC Divisional; Packers vs. Cardinals): “In the final 41 seconds alone, we had Aaron Rodgers completing a pair of Hail Marys to force overtime, a coin toss where the coin didn’t flip necessitating a re-flip, and a Larry Fitzgerald overtime explosion.”

Drew Esocoff (Odell Beckham, Jr. catch; Cowboys vs. Giants): “What I remember most was that we had just aired a highlight package of his pregame acrobatic catches and then…bam…he makes the most amazing catch I’ve ever seen!”

The newest member of NBC’s Football Night in America team, Drew Brees, turned in some record-breaking on-field performances of his own on Sunday Night Football, including the October 2012 game when he broke Johnny Unitas’ record for consecutive games with a touchdown pass (15th seed).

“Everything about breaking Unitas’ 47-game touchdown record was magical,” Brees said. “From the pressure leading up to that game, to all the games and touchdowns which preceded that moment, and for the man and legend who held the record for so long. Then to break it on Sunday Night Football with America watching….one of the great memories from my career.”

Following is a closer moment-by-moment look at the seeds in the “A Decade of Sunday N#1ghts” bracket:

#2 – Nov. 23, 2014 – N.Y. Giants receiver Odell Beckham makes a spectacular one-handed catch falling into the end zone for a 43-yard touchdown against Dallas – despite being interfered with on the play.

Michaels on the NBC broadcast: “How in the world?”

Collinsworth on the NBC broadcast: “That might be the greatest catch I’ve ever seen! You have to be kidding me. That is absolutely impossible!”

#4 – Feb. 4, 2018 (A “Philly Special,” Super Bowl LII) – Trailing 33-32 with less than 10 minutes remaining in regulation, Nick Foles – the backup quarterback who became the Eagles’ starter following a Week 14 injury to Carson Wentz — leads a 14-play, 75-yard touchdown drive, and the Philadelphia defense holds off two Patriots drives in the fourth quarter of 41-33 victory over New England. It is the Eagles’ first NFL title since 1960. Foles passes for 373 yards and three touchdowns, and is named Super Bowl MVP.

#6 – Feb. 5, 2012 (Super Bowl XLVI) – Eli Manning wins his second Super Bowl MVP in leading the New York Giants to a 21-17 victory over the New England Patriots. With less than four minutes remaining, Manning completes a 38-yard over-the-shoulder pass to Mario Manningham to begin a nine-play, 88-yard scoring drive that gave the Giants their second title game victory over the Patriots in four years.

#9 – Jan. 6, 2019 (“Double Doink” in NFC Wild Card) – Down two against the Eagles, Bears kicker Cody Parkey misses a 43-yard field goal as time expires, with the ball hitting the left goal post and then the crossbar. Cris Collinsworth coins the phrase “double doink” to describe the improbable kick.

Michaels during the telecast: “Like a scene out of a movie. Brett Favre. Bart Starr. The tradition. Lambeau Field. Great. Just great.”

#11 – Dec. 16, 2012 – The San Francisco 49ers turn a nearly historic collapse into a stunning victory and a playoff berth. San Francisco withstands a 28-point comeback by the New England Patriots to win 41-34. Michael Crabtree took a short pass from Colin Kaepernick and turned it into a 38-yard touchdown with 6:25 to go, then David Akers connected on a 28-yard field goal to clinch it.

#13 – Nov. 22, 2020 – In a game with four fourth-quarter lead changes, Patrick Mahomes throws a 22-yard TD pass to Travis Kelce with 28 seconds remaining to lead the Kansas City Chiefs to a 35-31 victory over the Las Vegas Raiders. Mahomes drove the Chiefs 75 yards in 75 seconds (on seven plays) on the game-winning drive.

#16 – Dec. 29, 2019 – The San Francisco 49ers 26-21 Week 17 “NFC West Championship” victory over the Seattle Seahawks in the final game of the decade concludes with a defensive stop inches short of the goal line. The game averaged 23.3 million viewers, ranking as NBC SNF’s most-watched game ever among West Coast teams.