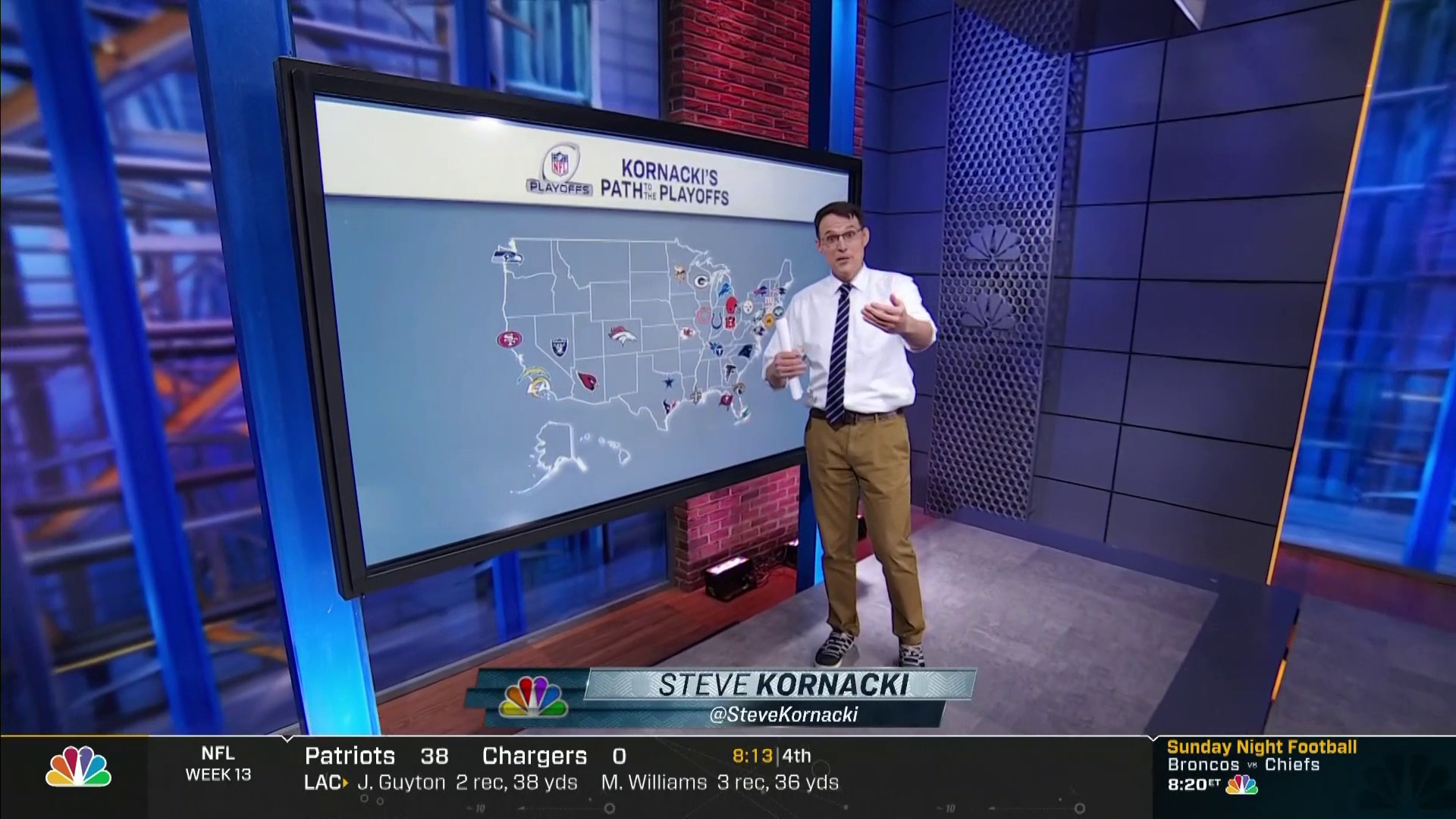 “They better be glad I don’t own the Jets. Gregg Williams and Adam Gase would both be unemployed tomorrow.” – Rodney Harrison

“On a day when we saw all kinds of questionable coaching decisions, Sean Payton continues to demonstrate great coaching.” – Tony Dungy on the Saints

“We thank the Bengals for participating this year. They’re eliminated.” – Mike Tirico

Steve Kornacki, NBC News’ celebrated political correspondent, joined FNIA to analyze NFL playoff probabilities from the Big Board following the conclusion of the Week 13 afternoon games. He will also appear at halftime of tonight’s game. For more information about Steve Kornacki, click here.

Following are highlights from tonight’s edition of Football Night in America on NBC:

Kornacki: “That Arizona loss today was costly, knocked them out of the playoffs (as of now) and puts Minnesota, by virtue of their victory over Jacksonville, in (the playoffs) … but the model still says Arizona (52%) with an easier path to the playoffs. So Arizona a better probability (than Minnesota 32%), despite falling out of the playoffs today.”

Cris Collinsworth on what he respects about WR Tyreek Hill: “His ability to practice the way that he does. When you watch that guy practice, he’s going full speed all the time.”

Harrison on Hill: “He tries to not only beat you, but embarrass you.”

Cris Collinsworth on the greatness of the Chiefs offense: “What makes it so intriguing right now is that Patrick Mahomes is so young. We don’t know if he’s just ascending (or if) he might get better, and he’s already far and away the best quarterback…right now, he’s the best in the game.”

Simms: “The offense really has no weakness…there’s no formula to beat them. They’re the best offense in football. There’s no doubt about it.”

Dungy: “I’ve been really impressed with Andy Reid’s evolution. When I was younger and coached against Andy, it was all pass, but I really think Eric Bieniemy (Chiefs offensive coordinator) being a former running back has helped him…they can do everything now.”

Simms on QB Aaron Rodgers: “That’s the MVP of football for my money right now.”

Cris Collinsworth: “It was the passing game that was in question for Cleveland. Good weather today and they did a little showing off.”

Simms: “We questioned, can they beat playoff-caliber football teams? They didn’t beat the Tennessee Titans today. They dominated them…their front-four is as good as anyone in football. Myles Garrett is the best pass rusher in football…Watch out for Cleveland. I think they’re more than a playoff contender now.”

Cris Collinsworth: “You look at Taysom Hill’s highlight reel and he can play. 225 pounds…can run 4.5, the (defense) can’t catch him. The question was could he throw the ball…and today, he goes off throwing the ball as well as running it.”

Dungy: “On a day when we saw all kinds of questionable coaching decisions, Sean Payton continues to demonstrate great coaching. His last eight games without his starting quarterback, he’s 8-0.”

Simms: “The first thing we’ve got to do is give credit to defensive coordinator Brandon Staley. He was phenomenal. He had a plan as far as stopping Kyler Murray from scrambling, especially to the right side.”

Dungy: “They got great coverage and were able to get pressure rushing four guys on Russell Wilson…big plays were few and far between. That secondary did a great job.”

Harrison: “Their defense is real. They’ve got a front four that can get to the quarterback. They don’t have to blitz in order to get pressure. Blake Martinez, he’s all over the field.”

Simms on QB Tua Tagovailoa: “He’s smart, poised, takes care of the football and gets out of the pocket…he understands the big picture of the game, I think that’s the most impressive thing about Tua.”

Simms on TE Mike Gesicki: “He’s one of the best red zone targets in football. He’s big, athletic and can jump up and get it.”

Simms: “Ridiculous. I don’t know what to say. That just can’t be allowed in our sport anymore. And then for the guy to do it again.”

Tirico: “Seven minutes in between (illegal hits) and this leads to a wild melee. People were very upset…Somehow, when all the players get thrown out – New York was involved, the League office – they didn’t throw out Mike Thomas, who was the guilty party twice. How does he not get thrown out when New York is involved? What are you guys thinking?”

Tirico: “We thank the Bengals for participating this year. They’re eliminated.”

Tirico: “Where is my man Brent Musburger? Jackpot for the Raiders!”

Dungy on final play of the game: “You can’t all-out blitz now here, can you? Leaving your corner one-on-one, are you kidding me?”

Simms: “Why is the corner jumping on the underneath route?”

Harrison to Dungy on the all-out blitz call by defensive coordinator Gregg Williams giving up the game-winning TD pass: “If you’re Adam Gase, do you overrule that?”

Dungy: “You practice that before it ever happens…As you know, your Friday practice, your Saturday practice, ‘Hey, here’s the last play of the game. How are we going to play it?’ That was unbelievable.”

Harrison: “It seemed like they were trying to lose to get the number one (draft) pick.”

Harrison: “They better be glad I don’t own the Jets. Gregg Williams and Adam Gase would both be unemployed tomorrow.”

Dungy on QB Jalen Hurts: “Philly fans have been calling for this. Can this man give them a spark? He did today.”

Harrison: “He’s not just an option quarterback. Let him be a quarterback, give him a chance…quarterback play inspires everyone.”

Dungy on Bears leading 30-27 late in the game: “This is what I had trouble figuring out. Trying to run the clock out two times in a row (leading to a) sack-fumble.”