PEACOCK FEATURES “ROAD TO TOKYO” CHANNEL, ORIGINAL DOCUMENTARIES AND EXCLUSIVE SPECIALS TO CELEBRATE ONE YEAR UNTIL THE TOKYO GAMES 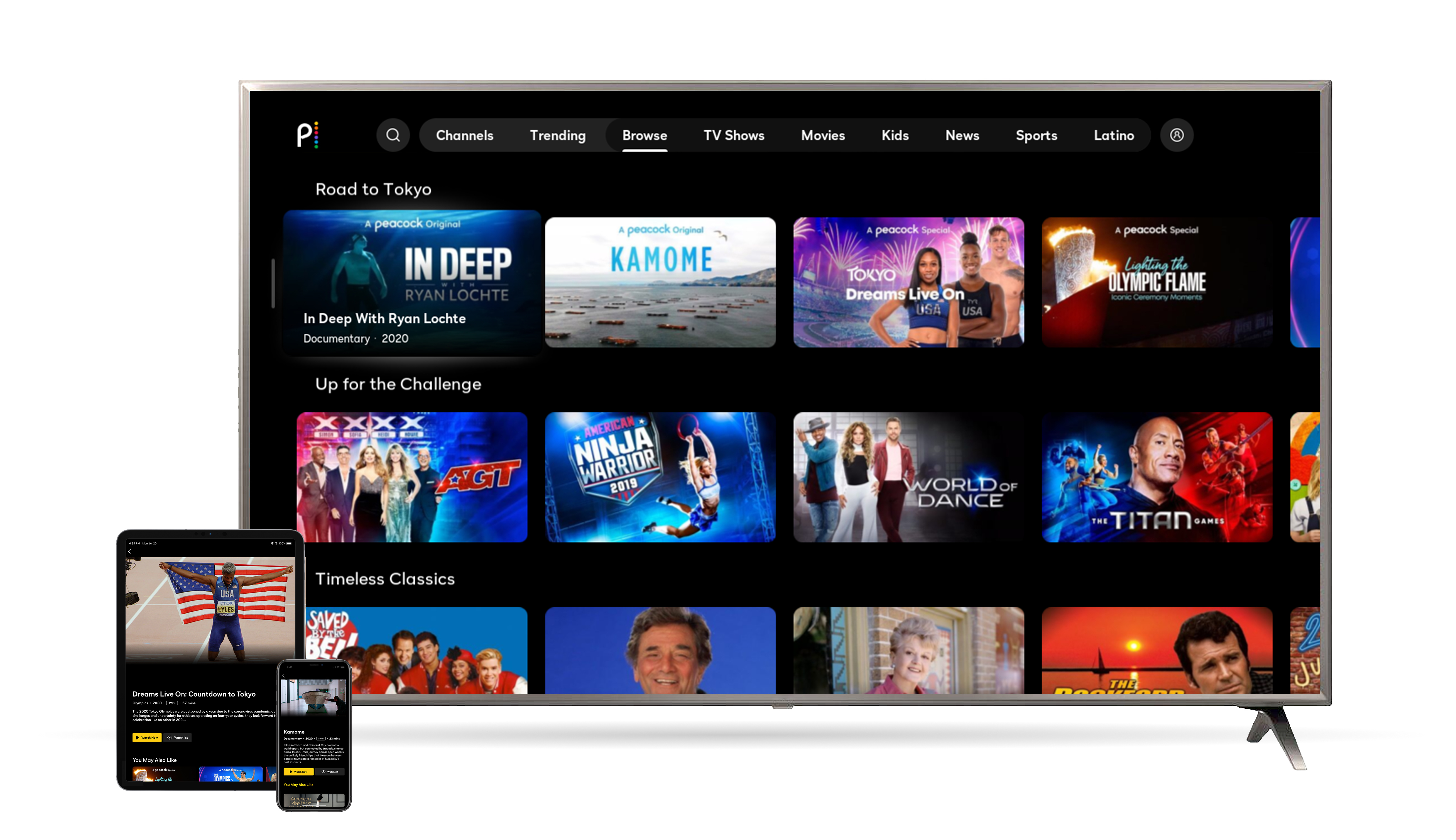 NEW YORK, N.Y. – July 22, 2020 – With just over one year until the Tokyo Olympics begin on July 23, 2021, Peacock has created its first pop-up channel: “Road to Tokyo,” a 24/7 stream dedicated to Olympic and Paralympic classic moments, documentaries and studio programming, Peacock and NBC Olympics announced today.

Peacock will also feature a collection of on demand content that includes 10 documentaries produced by NBC Olympics, highlighted by Peacock Originals In Deep with Ryan Lochte and Kamome (detail below). Additionally, Olympic Classics replays revisit the most inspirational events of recent Games, including Simone Biles’ gold-medal winning performance at the Rio 2016 Olympics, gold medal victories from Team USA in men’s basketball by the ‘Dream Team’ at Barcelona 1992 and LeBron James and Kobe Bryant at Beijing 2008, as well as Carli Lloyd’s two-goal performance to propel women’s soccer to a gold medal at London 2012.

Additionally, three exclusive, new specials to prepare fans for what could be the most meaningful Olympics ever will be featured. Dreams Live On: Countdown to Tokyo examines the journey of star athletes, such as Simone Biles and Allyson Felix, preparing for next year’s Tokyo Olympics. Lighting the Olympic Flame: Iconic Ceremony Moments looks back at past Opening Ceremonies with interviews with participants like Michael Phelps and composer John Williams. The Olympics & Paralympics: Inspirational Moments presents moments of courage and sportsmanship from recent past Olympics.

Peacock constantly updates Trending with the latest in sports, news and pop culture, so viewers can expect to find current interviews with athletes preparing for Tokyo this week. Also, viewers can watch numerous short-form video clips on demand on Peacock, including athlete profiles on Tokyo Olympic hopefuls and memorable events that took place on specific dates in Olympic history.

In Deep with Ryan Lochte

At the 2016 Rio Olympics, Ryan Lochte was at the center of a scandal that has since overshadowed a decorated swimming career that includes 12 Olympic medals. Now a 35-year-old husband and father of two young children, Lochte is hoping for one more chance to make Team USA and prove he’s not the same man he was four years ago.

Brought together under unfortunate circumstances, the towns of Rikuzentakata, Japan and Crescent City, California now have a special bond made possible by a fishing boat named Kamome. The vessel washed up in Crescent City after the deadly 2011 tsunami that struck Japan and devastated Rikuzentakata. To the people of Crescent City, it brought back memories of the 1964 tsunami that devastated their own hometown. Now, the two communities have built a close connection that provides a welcome reminder of the best of humanity.

Narrated by four-time Olympic gold medalist and 23-time Grand Slam singles champion Serena Williams, 1968 tells the story of a defining year in American history. Martin Luther King Jr. and Robert F. Kennedy were assassinated, and 1968 would prove to be the deadliest year of the Vietnam War. Against that backdrop, the Mexico City Olympics became a stage for the collision of sport and politics, immortalized by the Black Power salute of Americans Tommie Smith and John Carlos.

Voiced by iconic actor and acclaimed author Rob Lowe, the men’s and ladies figure skating competition at the 1988 Winter Olympics are in the spotlight, featuring Americans Debi Thomas and Brian Boitano as they faced their rivals Katarina Witt and Brian Orser on the highest stage of competition.

The remarkable story of 13-time Paralympic gold medal swimmer Jessica Long details how she discovered her birth family and embarked on a journey through a past she never knew, all the way from her adopted parents’ home in Baltimore, Md. to Bratsk, Russia. In the end, it leads Long to a profound personally discovery; how her two halves have helped make her the whole individual that she is.

More Than Gold: Jesse Owens and the 1936 Berlin Olympics

This hour-long documentary, narrated by Academy Award winner Morgan Freeman, chronicles Jesse Owens’ historic four-gold-medal performance at the 1936 Olympic Games in Berlin, Germany, and explores the context and historical impact of those Games.

Featuring footage and interviews from arguably the greatest basketball team ever assembled, this documentary looks at the formation and success of Team USA at the 1992 Summer Olympics, including interviews with Hall of Fame players Michael Jordan, Magic Johnson and Charles Barkley.

The special gives viewers an all-access look at Mikaela Shiffrin and her team during the 2018-19 campaign and highlights one of the greatest years in the history of alpine ski racing, when Shiffrin won 17 World Cup races, four crystal globes, and her third straight overall globe.

A documentary, narrated by Liev Schreiber, that examines the 2011 plane crash that killed every member of the Lokomotiv Yaroslavol hockey team of the Kontinental Hockey League (KHL), and how the team was rebuilt in the wake of tragedy.

In addition to this Olympic and Paralympic content, Peacock will feature a range of sports content: exclusive Premier League matches, coverage of the U.S. Open Championship and Women’s Open Championships, an NFL Wild Card Playoff Game, the Tour de France, La Vuelta and select events from the upcoming Tokyo and Beijing Olympics. In addition, sports fans can enjoy on demand replays of events like Triple Crown horse racing, daily highlights from NBC Sports, and hundreds of hours of sports series, documentaries and films such as Tiger Woods Chasing History, I Am Ali, Being Evel, Feherty and Willie.