FOR IMMEDIATE RELEASE
Wednesday, May 13th, 2020 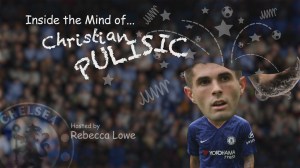 STAMFORD, Conn. – May 13, 2020 – NBC Sports’ Premier League coverage this week features Christian Pulisic’s one-on-one interview with Rebecca Lowe on tomorrow’s Inside the Mind. That’s followed by 12 hours of programming this weekend, highlighted by Manchester United winning their first trophy in what would be an unprecedented, treble-winning 1998-99 season.

Saturday’s classic matches on NBCSN feature 30-minute versions of some of the most memorable games in Premier League history. The games begin at 10 a.m. ET, as Manchester City powered to a 6-3 win over Arsenal at Etihad Stadium in December 2013. Goals from City’s Sergio Aguero, Alvaro Negredo, David Silva, Yaya Toure and a Fernandinho brace highlighted the game. The result also was a catalyst for City in a season that would see them lift both the League Cup and the Premier League trophies.

At 10:30 a.m. ET, relive a famous Manchester United comeback, as the Red Devils roared back from a 2-0 deficit against Tottenham to claim a thrilling 5-2 victory at Old Trafford on April 25, 2009. Two goals from both Cristiano Ronaldo and Wayne Rooney, plus one from Dimitar Berbatov, helped United secure the comeback win en route to the 2008-09 Premier League title.

Then at 11 a.m. ET, Arsenal’s Robin van Persie scored a hat trick as the Gunners came from behind twice to overcome Chelsea, 5-3, in a thrilling London derby at Stamford Bridge in October 2011. Saturday’s encore matches culminate at 11:30 a.m. ET on NBCSN with Tottenham’s biggest ever Premier League victory – a 9-1 win over Wigan Athletic at White Hart Lane on Nov. 22, 2009. Spurs’ Jermain Defoe was the star of the match as he netted five goals, a joint-record for the most goals in a single Premier League game. Goals from Tottenham’s Peter Crouch, Aaron Lennon, David Bentley and Niko Kranjcar also highlighted the match.

On Sunday beginning at 8 a.m. ET, to celebrate what would have been this season’s “Championship Sunday,” NBCSN presents full event replays of two of the most unforgettable Premier League final-day matches, starting with Manchester United securing a fifth title in seven seasons after coming from behind to beat Tottenham, 2-1, at Old Trafford on May 16, 1999. The Red Devils’ Premier League title was one part of their unprecedented, treble-winning season of 1998-99, as they captured the other two most prestigious trophies an English club can win – the FA Cup and Champions League – shortly thereafter.

Sunday’s matches conclude at 10 a.m. ET on NBCSN with one of the most dramatic days in the history of English football. Manchester City won their first ever Premier League title with a 3-2 win over Queens Park Rangers on May 13, 2012. Aguero and Edin Dzeko scored in second-half stoppage time as City won the title on goal difference over crosstown rivals Manchester United. Tomorrow, NBC Sports’ Premier League analysts Kyle Martino and Robbie Mustoe will look back and provide commentary on this match, as part of Thursday’s classic Premier League matches shown across NBC Sports’ digital properties, including NBC Sports’ YouTube channel, NBCSports.com, and the NBC Sports app.

Then at 7 a.m. ET on NBCSN, Premier League Download: Behind the Whistle features Arlo White and Graeme Le Saux being given unprecedented access to the world of Premier League referees in an effort to explore what it takes to be an elite referee. Along with interviews with current and former Premier League referees, White and Le Saux were the first members of the media, both internationally and domestically, to be granted admission into the normally-restricted referees’ film room, where current Premier League referees’ match performances are graded and reviewed. Le Saux was also given the opportunity to measure his physical fitness against current referees, and was tested on his ability to correctly indicate offside in this exclusive look at a key aspect of the game.

“INSIDE THE MIND” OF CHRISTIAN PULISIC

On Thursday’s episode of Inside the Mind, Rebecca Lowe chats with Chelsea and U.S. Men’s National Team star Christian Pulisic. Among the topics of conversation are Pulisic’s charity work during the COVID-19 pandemic, his recovery from a January injury and his hat trick at Burnley in October.

Lowe hosted yesterday’s episode of Lunch Talk Live, where a portion of her interview with Pulisic was shown. The full interview can be seen on the “Premier League on NBC Sports” YouTube channel tomorrow, Thursday, May 14.

Premier League coverage on NBC and NBCSN will be streamed on NBCSports.com. Coverage will be streamed via “TV Everywhere,” giving consumers additional value for their subscription service, and making high quality content available to MVPD customers both in and out of the home and on multiple platforms.