WASHINGTON, D.C., and BETHESDA, MD – April 27, 2020 – NBC Sports Washington, in partnership with Monumental Sports & Entertainment, will present five-part special series for both the Washington Capitals and Washington Wizards, entitled Greatest Hits, featuring many of the teams’ most historic and memorable performances, beginning this week. The one-hour weekly editions per team will be highlighted by full-length commentary from participants who played key roles in the respective game, including high-profile former players, and will be hosted by members of NBC Sports Washington’s Capitals and Wizards announcing teams.

Beginning tonight, Capitals Greatest Hits will debut Mondays at 7 p.m. through May 25. The premiere episode will feature the team’s Game 7 overtime victory against the New York Rangers in the first round of the 2009 NHL playoffs on April 28, 2009. Matt Bradley, a current Capitals scout who played six seasons as a forward with the team from 2005-06 to 2010-11, will join hosts Joe Beninati and Craig Laughlin to provide his unique perspective as an impact player in that postseason. Bradley scored two goals in Game 6 to force the series-clinching Game 7, which earned the team its first playoff series win since 1998. In addition, following tonight’s debut, NBC Sports Washington will present #HockeyAtHome: The Great One and the Great Eight, the first-ever joint interview with Wayne Gretzky and Alex Ovechkin.

The Wizards editions of Greatest Hits will debut Thursdays, beginning April 30, at 7 p.m., through May 28. This week’s premiere episode features the then-Bullets Game 7 win in the 1978 NBA Finals against the Seattle SuperSonics, which captured the franchise’s first NBA Championship on June 7, 1978. Host Chris Miller will be joined by a pair of the team’s key contributors from the team’s successful 1970s era: Phil Chenier and Kevin Grevey. The duo will share their unique and special memories of that momentous night, their teammates and opponents while watching events unfold again nearly 42 years later.

Information on additional editions of the Capitals and Wizards Greatest Hits will be announced on an ongoing basis and are expected to include Capitals contributors such as former goaltender Olie Kolzig, former forward Troy Brouwer and former head coach Bruce Boudreau; and Wizards guests such as current guard John Wall, former center Marcin Gortat and current head coach Scott Brooks. Each program will encore on NBC Sports Washington multiple times, and complementary Greatest Hits content will be available across its digital platforms, including NBCSportsWashington.com and the MyTeams app. 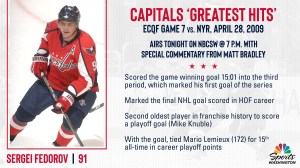