NBC SPORTS CHICAGO, UNITED WAY OF METRO CHICAGO AND THE CHICAGO COMMUNITY TRUST ANNOUNCE “BE CHICAGO: TOGETHER WE CAN” FUNDRAISER ON APRIL 29TH AT 7PM CT 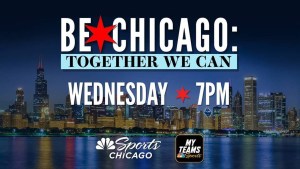 Chicago, IL (April 27, 2020) – In support of Chicago’s fight against COVID-19 and to aid the on-going efforts by United Way of Metro Chicago and The Chicago Community Trust, NBC Sports Chicago has announced a special fundraising event, Be Chicago: Together We Can, airing on Wednesday, April 29 at 7:00 PM CT (live stream also available to authenticated NBC Sports Chicago subscribers at NBCSportsChicago.com/WatchLive or via the “MyTeams by NBC Sports” app). This special four-hour telecast, benefiting the “Chicago Community COVID-19 Response Fund,” will feature appearances by Chicago’s beloved athletes from the Blackhawks, Bulls, White Sox, Bears and Cubs, music and comedy performances, special segments honoring the Chicago-area’s frontline heroes and much more.

Following is a list of the exclusive special guest interviews, segments and performances:

Throughout Be Chicago: Together We Can, several of Chicago’s COVID-19 frontline heroes will share how they are battling and continuing their fight to help those in need during this critical time.  With each of these interviews, NBC Sports Chicago has brought in a “surprise special guest” to thank these heroes for their selfless efforts, which include appearances by Bulls guard Zach LaVine, Blackhawks defenseman Brent Seabrook, Cubs starting pitcher Jon Lester, former Cubs pitcher Carlos Zambrano and NBC Sports Chicago White Sox analysts Ozzie Guillen and Scott Podsednik.

“We have all been impacted by this crisis and we can get past it at some point, but we have to do it together,” said Kevin Cross, Senior Vice President/General Manager, NBC Sports Chicago.  “Our commitment at NBC Sports Chicago is to be a part of our community through sports and if we can help those in need through this special event, then we will be living up to our commitment.  United Way of Metro Chicago and The Chicago Community Trust have done an outstanding job providing for those in need through the ‘Chicago Community COVID-19 Response Fund’ and we couldn’t be prouder and more honored to assist them in their on-going efforts.  On behalf of our entire network, I would like to thank the teams, athletes, musical artists and all the guests who immediately offered up their support to be a part of this special event, along with an additional thank you to our local NBCUniversal partners, NBC 5 and Telemundo Chicago, for their gracious promotional support.”

“When we started the Chicago Community COVID-19 Response Fund in partnership with The Chicago Community Trust and the City of Chicago, we were confident that Chicagoans would step up to support their neighbors in whatever way they could,” added Sean Garrett, President and CEO of United Way of Metro Chicago. “We’ve been encouraged by how individuals and organizations have gone above and beyond to do their part. There’s still a lot of work to be done, but thanks to partners like NBC Sports Chicago, we’re able to provide essential resources to those in our region who are hit hardest by the crisis.”

To donate to NBC Sports Chicago’s Be Chicago: Together We Can” fundraiser benefiting the “Chicago Community COVID-19 Response Fund,” text Help4ChiCovid to 41444 or visit NBCSportsChicago.com/BeChicago.

Established on March 16, 2020, the “Chicago Community COVID-19 Response Fund” was created in tandem by the Chicago Community Trust and the United Way of Metro Chicago.  In partnership with the City of Chicago, Chicago philanthropy, business leaders, and generous donors, the “Chicago Community COVID-19 Response Fund” has been rapidly deploying flexible resources to local nonprofit organizations serving those who are the most vulnerable in the region.  Currently, this includes access to emergency food and basic supplies, rent and mortgage assistance, utility assistance and direct financial assistance for household expenses and medicine.

About United Way of Metro Chicago

United Way of Metro Chicago brings together businesses, government, nonprofits, and community leaders to deliver funding, resources, and expertise to nonprofit organizations across greater Chicago. We are working alongside our partners at the neighborhood level to tackle the systemic issues that have plagued our region, creating communities where children and families can thrive. United Way’s Neighborhood Network Initiative supports and coordinates investment and programming in 10 city and suburban communities to address community challenges and improve the lives of residents. United, we’re building stronger neighborhoods for a stronger Chicago region. For more information, visit LIVEUNITEDchicago.org.