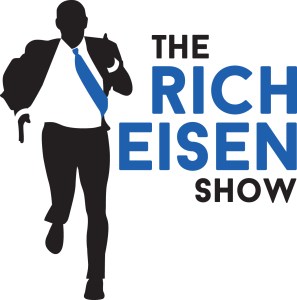 The Rich Eisen Show, which will be presented live on NBCSN from Monday through Friday from 1-3 p.m. ET through June 12, features an engaging mix of sports, humor and pop culture, while attracting the most recognizable names in sports and entertainment.

“We are excited to bring Rich and The Rich Eisen Show on board for the next two months as we continue to offer special programming in these uncertain times,” said Jon Miller, President of Programming, NBC Sports and NBCSN. “Rich and his team are uniquely positioned to provide viewers a compelling mix of NFL-related discussion – with the Draft and schedule release upcoming – and popular wide-ranging sports and entertainment content with marquee guests that have been a hallmark of the show.”

“Everyone here at The Rich Eisen Show is excited about working with NBC Sports this spring and what it means for the continued success of this show,” said Eisen, who on April 23-25 will host the NFL Draft on NFL Network for the 17th consecutive year. “Over the past five plus years, we are proud of our unique blend of sports and entertainment that we built and look forward to meshing our brand with NBC Sports and NBCUniversal.”

The Rich Eisen Show will follow the Noon ET Lunch Talk Live with Mike Tirico, which debuted this past Monday, April 6, and will also stream live on NBCSports.com and the NBC Sports app – as NBC Sports presents three hours of daily live sports talk from Noon to 3 p.m. ET on weekdays.

Rich Eisen has been the signature host for NFL Network since he was hired as the network’s first on-air talent in June 2003. Prior to joining NFL Network, he had a memorable eight-year run at ESPN, where he became one of the network’s most visible personalities as host of SportsCenter as well as a variety of other high-profile assignments. The Rich Eisen Show debuted in October 2014 and following its second full year (2016) was nominated for a Sports Emmy for Outstanding Studio Show-Daily.