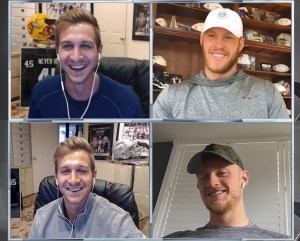 STAMFORD, Conn. – April 1, 2020 – Hosted by Jac Collinsworth, NBC Sports’ new digital series, “Distanced Training: Ready to Get Back in the Game,” debuts today, Wednesday, April 1, providing fans with “a day in the life” of some of the top professional, collegiate, and Olympic athletes via exclusive home footage. The daily shows will be available across NBC Sports’ digital properties, including NBC Sports’ YouTube channel, NBCSports.com, the NBC Sports app, and NBC Sports’ social media accounts.

In each 30-minute episode, Collinsworth will explore how athletes stay physically and mentally sharp as they adapt their training under social distancing guidelines. Throughout the series, Collinsworth will be joined virtually by more than 20 professional, collegiate and Olympic athletes, who will share their weekly home workouts, mental training, and daily spare time activities.

Following is this week’s schedule for “Distanced Training: Ready to Get Back in the Game,” (all times E.T. and subject to change):