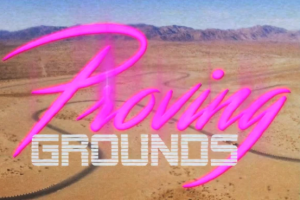 The hit show will return for its second season featuring seven episodes that will test a variety of cars from American-built to European exotics on a custom-built track in Southern California. Proving Grounds is hosted by NASCAR driver and NBC Sports analyst Parker Kligerman and Road & Track editor Sam Smith, and features Sports Car Champion driver Leh Keen. A preview of Proving Grounds is available here.

“When we were given a Season Two of Proving Grounds, myself, Sam Smith, Leh Keen, and the entire production crew decided to get incredibly ambitious” said Kligerman. “We created the car show that we have always wanted to make. I hope the viewers have as much fun watching it as we did making it.”

Kligerman, Smith and Keen gauge speed, performance and fun across 20 different vehicles including Kligerman’s own No. 96 Toyota Camry Cup Car, a Porsche 911, a Hennessy Velociraptor and a Fiat 500 Abarth. Each vehicle is put through a variety of obstacles including speed bumps, wet pavement, a chicane and even a herd of fake deer.

In addition, the premiere of sixth season of /DRIVE on NBCSN airs Sunday at 8 p.m. ET following the Season Two premiere of Proving Grounds. /DRIVE on NBCSN goes beyond the boundaries of traditional car shows and investigates the cultural crossroads in automotive history. Hosts Mike Spinelli and Chris Harris are joined by a rotating cast of characters, including Alex Roy, Zack Klapman, and Kristen Lee. A preview for /DRIVE on NBCSN is available here.

More than 1,000 vehicles will cross the auction block at this week’s Mecum Auctions event at the Kay Bailey Hutchinson Convention Center in Dallas, Tex. Among them is an array of Dodge models, including a 1971 Hemi Charger R/T and a 1969 Daytona, and vehicles from the Peter Swainson Collection. Prominent vehicles from the Tommy Cronk Collection will also be on display, as well as the Buick GS Quartet.

Coverage begins on Wednesday on NBCSN with live three-hour blocks of auction action from Dallas. Coverage continues Thursday at noon ET with a five-hour live window on NBCSN. NBCSN will present coverage from Dallas throughout the weekend.