STAMFORD, Conn. – September 4, 2019 – The home of Sunday Night Football, primetime television’s #1 show for an unprecedented eight consecutive years, NBC Sports is launching a weekly NFL free-to-play game, Sunday Night 7. Fans can participate for the first time leading up to this week’s Sunday Night Football opener (Steelers at Patriots, 8:20 p.m. ET on NBC) as the competition begins for $2 million in guaranteed cash prizes over the course of the regular season and NBC NFL playoff games ($100,000 in guaranteed prizes for each contest).

Contest questions will change on a weekly basis, and cover a range of predictions from head-to-head positional statistical matchups – such as “Which team’s quarterback will have more yards and touchdowns?” – to the game result, who scores the game’s first or last touchdown, the total touchdowns in the game, total points in the game, and the length of the longest touchdown or field goal in the game. 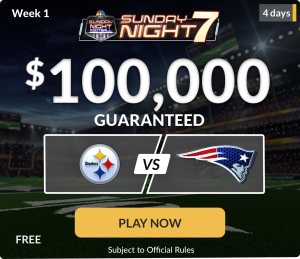 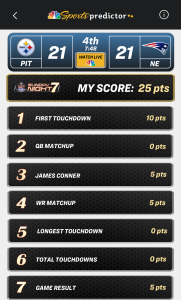