NBC SPORTS PHILADELPHIA TOUCHES DOWN IN LONDON FOR EAGLES-JAGUARS COVERAGE

PHILADELPHIA- (October 26, 2018) – NBC Sports Philadelphia, the home of the Authentic Fan, is touching down in London ahead of the Eagles-Jaguars game. On-site multiplatform coverage will be provided by John Clark, Reuben Frank and Derrick Gunn. NBC Sports Philadelphia will also have coverage in “Philly Sports Talk,” “Quick Slants,” “SportsNet Central,” and Eagles Pre and Postgame Live. Fans can tune into “Birds in Britain,” a 30-minute special debuting on NBC Sports Philadelphia tonight at 6:30 p.m.

Eagles’ fans can log onto www.nbcsportsphiladelphia.com, and follow @NBCSPhilly on all social media channels for exclusive coverage of fans as they converge on London ahead of the game, plus other great articles, videos, podcasts and photos. Coverage can also be found on the MyTeams App. Download it here: MyTeams 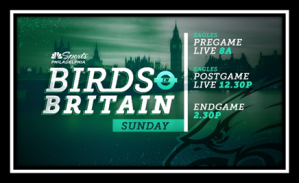