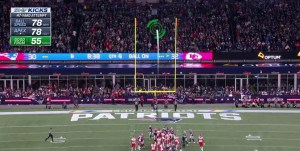 STAMFORD, Conn. – October 25, 2018 –  NBC Sports this weekend will debut television’s first-ever field goal “tracer” on Sunday Night Football, as the New Orleans Saints (5-1) visit the Minnesota Vikings (4-2-1) in a meeting of first-place NFL teams, and a rematch of their memorable 2017 NFC Divisional Playoff.

Using TrackMan technology – utilized and popularized in a longtime partnership with NBC Sports/Golf Channel golf coverage – SNF Kicks determines “good from” on field goal attempts by tracking the football from when it is kicked until the ball hits the net. The full flight measurement along with advanced modeling techniques determines the maximum distance the kick would have been good from, based on both distance and direction (any hook or slice).

“As we continue to use the most cutting-edge technology to enhance our Sunday Night Football broadcast, we are excited to add the tracer to our coverage,” said Fred Gaudelli, executive producer of SNF. “With many games coming down to field goals, this new element will illustrate the flight of the football, while also providing many statistics pertinent to the kicking game. And field goals are only the beginning. By the end of the season, we hope to be showcasing the technology on kickoffs and punts, and eventually make our way to the passing game.”

“We are excited to provide this first-of-its-kind of information to viewers,” said Justin Padjen, product manager at TrackMan. “NBC Sports’ vision aligns well with what we feel is attainable with the data being measured. We look forward to creating more of these unique insights to provide a deeper understanding of the action on the field.”

The kickers this Sunday night won’t have to deal with weather variables, as the Vikings play indoors at U.S. Bank Stadium. Saints third-year kicker Wil Lutz has converted 16 of 22 field goal attempts of 45+ yards (72.7%), with a long of 57 yards, while Vikings eight-year veteran Dan Bailey has converted 55 of 76 field goal tries of 45+ yards (72.4%), with a long of 56. The NFL success rate on 45+ yard field goal attempts this season is 65.7%.