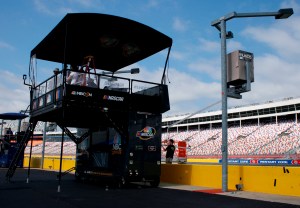 STAMFORD, Conn. – June 18, 2018 – NBC Sports announced today the debut of the NASCAR on NBC “Peacock Pit Box,” a state-of-the-art remote studio set designed to bring viewers closer to the action during NBC and NBCSN’s coverage of the 2018 NASCAR season. Built within a traditional pit box frame, the “Peacock Pit Box” will be set up along pit road at each speedway throughout the season.

Featuring two-levels, NASCAR on NBC host Krista Voda, as well as analysts Kyle Petty and Dale Jarrett, will call the top deck of the “Peacock Pit Box” home, as they anchor pre- and post-race coverage of NBC Sports Group’s 2018 Monster Energy NASCAR Cup Series and Xfinity Series races. The lower level of the “Peacock Pit Box” will provide additional broadcast positions, as well interactive displays and screens to analyze the on track action.

With a footprint of 14 ft. by 12.5 ft., the “Peacock Pit Box” will bring viewers closer to the action, chaos and excitement on pit road each week, similar to NBC’s “Inside The Glass” position which revolutionized coverage of the NHL.