FOR IMMEDIATE RELEASE
Wednesday, May 30th, 2018 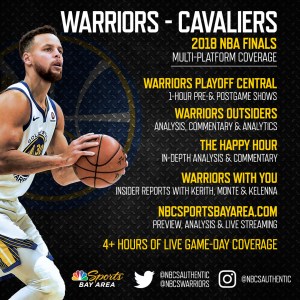 Surround Each Game with 4+ Hours of News, Analysis and Commentary

to Originate from Oracle Arena and Quicken Loans Arena

“Warriors With You” and NBCSportsBayArea.com to Provide Comprehensive

on NBCSportsBayArea.com and via NBC Sports App

SAN FRANCISCO, Calif. – May 30, 2018 – NBC Sports Bay Area and NBCSportsBayArea.com (@NBCSAuthentic), the home of the most comprehensive local coverage of the defending NBA Champion Golden State Warriors, continue their extensive season-long coverage into the 2018 NBA Finals as the Warriors match up against the Eastern Conference Champion Cleveland Cavaliers for the fourth straight season.

The network’s Warriors-Cavaliers coverage is highlighted by over four hours of live game-day coverage on SportsNet Central: Warriors Playoff Central, Warriors Outsiders and The Happy Hour.  Throughout the NBA Finals, the network will continue to present complete Warriors coverage with daily news, preview and analysis programs; in-depth online coverage from NBCSportsBayArea.com; and enhanced social media interaction.

Live Warriors-Cavaliers postgame coverage: After the game, Warriors Playoff Central, a one-hour show, will feature in-depth game analysis with stats and highlights, locker room interviews and a preview of the next game.

Visit NBCSportsBayArea.com and follow @NBCSAuthentic and @NBCSWarriors on Twitter for air dates/times and channel locations for Warriors Playoff Central during the NBA Finals.

Warriors Outsiders – Warriors Outsiders (@GSWOutsiders), hosted by Drew Shiller and Grant Liffmann, will provide viewers with a fresh take on each Warriors-Cavaliers game with analysis, commentary and basketball analytics. Warriors Outsiders is simultaneously synced with Facebook Live to produce a unique conversation via an interactive experience.  The show will air before and after each game.

The Happy Hour – The Happy Hour (@NBCSHappyHour), a live hour-long conversational program – hosted by Greg Papa, Ray Ratto and Kelli Johnson – regularly airs live weekdays at 5 p.m.  The Happy Hour showcases the distinctive voices and wit of Papa, Ratto and Johnson sharing their unfiltered spirited commentary, in-depth Warriors and NBA news and analysis, and lively conversation on the day’s trending sports headlines and other provocative stories.  On game day, the show will air before and after each matchup.

Warriors With You – Warriors With You (#WarriorsWithYou) – a live multi-platform, half-hour show hosted by Warriors reporter Kerith Burke and Warriors Insider Monte Poole – will be presented throughout the playoffs on Facebook Live.  Kelenna Azubuike will join the show during road games.  Warriors With You will deliver a comprehensive breakdown of the Warriors-Cavaliers series, the latest team developments and insider reports.  Fans will have the opportunity to interact with Burke, Poole and Azubuike during the shows via Facebook Live.