PLUS — Live streaming coverage of EVERY Dash telecast to be made available to authenticated subscribers on NBCSportsChicago.com/WatchLive and via the NBC Sports app!

Chicago, IL (May 17, 2018) – NBC Sports Chicago, the multi-platform home for the most games and most comprehensive coverage of the Chicago White Sox, along with extensive live game coverage featuring the Class AAA affiliate Charlotte Knights, has announced it will be carrying seven games showcasing the White Sox Class “A-Advanced” affiliate, the Winston-Salem Dash.

Fans are also urged to visit NBCSportsChicago.com’s “WhiteSoxTalk” section (NBCSportsChicago.com/WhiteSox) for the latest progress reports on all the White Sox prospects at Class “A-Advanced” Winston-Salem throughout the season, along with 24/7 coverage on Twitter @NBCSWhiteSox.  In addition, the popular “White Sox Talk PODCAST” (presented by Wintrust), hosted NBC Sports Chicago White Sox expert Chuck Garfien and an array of special guests, features in-depth White Sox minor league reports, including the latest news on all the key prospects at Class AAA Charlotte and Class AA Birmingham, each and every week throughout the season.  Fans can download all of NBC Sports Chicago’s podcasts at NBCSportsChicago.com/podcasts and simply subscribe to them via Apple Podcasts, Google Play or Stitcher.  The podcasts can be played on any  mobile device, laptop, or desktop computer. 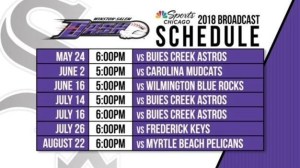