STAMFORD, Conn. – February 8, 2018 – NBC Olympics will surround the XXIII Olympic Winter Games from PyeongChang, South Korea, with a social media blitz that includes around-the-clock content across all of NBC Olympics’ social accounts and partnerships with celebrities, notable digital influencers, Musical.ly, Giphy, and more. As previously announced, NBC Olympics and Snap Inc. will partner to bring the first-ever live event coverage to Snapchat during NBC Olympics’ coverage of the Games. 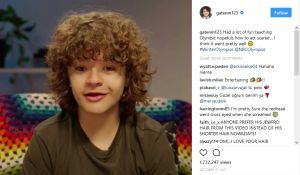 CELEBRITY AND INFLUENCER PARTNERSHIPS: NBC Olympics has teamed up with Gaten Matarazzo of Netflix’s “Stranger Things.” In October, Matarazzo released his first piece of Olympic-centric content across his social platforms in lockstep with the debut of Season 2 of Netflix’s “Stranger Things,” and has continued to promote The Winter Olympics in the months leading up to the Opening Ceremony. 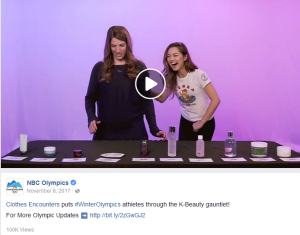 In addition NBC Olympics has partnered with several influencers ahead of the Games, including YouTube beauty vlogger and fashion designer Jenn Im and YouTube sports and lifestyle vlogger Monica Church, to push out Olympic-related content to their followers leading up to the Opening Ceremony from PyeongChang. Im interviewed US athletes in the Winter Olympics and Paralympics on how much they know about Korean Beauty, while Church tested Olympians on some everyday tasks.

Through a strategic eight-month roll out plan, this custom content has been distributed through NBC Olympics, athlete, celebrity and influencer social channels, and has garnered millions of impressions. 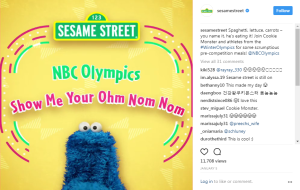 MUSICAL.LY: New for the PyeongChang Games, NBC Olympics will partner with Musical.ly to bring two content creators – Nia Sioux and Ross Smith – to South Korea to document their experience at the Games, in addition to creating hashtag challenges for all musical.ly users to interact with on the app in the lead up to the Games. NBC Olympics will also post Olympic highlights and GIFs on Musical.ly through its new @NBCOlympics musical.ly account.

GIPHY: New for the PyeongChang Games, NBC Olympics will partner with GIPHY to transform Olympic coverage and highlights into custom GIFs. In addition, through the GIPHY API, bespoke promotional GIFs shot with Team USA at the USOC and West Hollywood Summits will be made available for sharing across social networks, messaging apps and more. GIPHY is the first and largest GIF search engine serving more than 2.5B GIFs every day to over 300M daily active users.

#NBCUTORCHRELAY: NBC Olympics is enlisting the help of several of NBCUniversal’s high-profile networks to take part in a GIF “torch relay,” a social initiative that will incorporate a torch emoji into GIFs posted across the social media accounts from networks and shows of NBC Sports, NBC Entertainment, NBC News, Bravo, MSNBC, Oxygen, USA Network, Universal Home Entertainment and over 60 stations from Guam to New York City.

The relay began at the conclusion of Super Bowl LII on NBC, with a new post from a different network shared each half-hour per day, using #NBCUTorchRelay, culminating with the emoji torch being “passed” from @TodayShow and its anchors tomorrow morning to @MikeTirico, the new NBC Olympics Primetime Host. The emoji torch will be “passed” to TODAY with a special segment from the show’s “Orange Room,” just prior to the opening night of competition of the 2018 PyeongChang Olympics.

SNAPCHAT: NBC Olympics and Snap Inc. will partner to bring the first-ever live event coverage to Snapchat during NBC Olympics’ coverage of the Games. In the premiere of Snapchat’s new “Live” feature, NBC Olympics will live stream a top moment each day on its Discover page to Snapchatters in the United States, beginning this Saturday, February 10. This will mark the first time that NBC Olympics has ever distributed live Olympic programming off of its own platforms.

In addition, the Snap and NBC Olympics partnership will include custom Context Cards in “Our Stories,” with information from NBCOlympics.com curated by teams of editors at Snapchat. NBC Olympics will also debut two original shows on Snapchat Discover – Pipe Dreams and Chasing Gold – and will again work with BuzzFeed to co-produce daily Publisher Stories, after NBC’s successful partnership with BuzzFeed during the Rio Olympics. Click here for more information.

A division of NBC Sports Group, NBC Olympics is responsible for producing, programming and promoting NBCUniversal’s Olympic Games coverage. It is renowned for its unsurpassed Olympic heritage, award-winning production, and ability to aggregate the largest audiences in U.S. television history. NBCUniversal owns the U.S. media rights on all platforms to all Olympic Games through 2032.