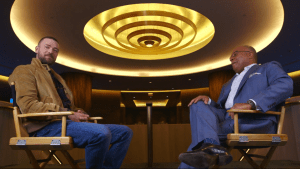 “What I really want to do is take the opportunity to put together a performance that feels like it unifies.” – Timberlake

STAMFORD, Conn. – Oct. 22, 2017 – Following is a transcript of an interview that aired during halftime of tonight’s NBC Sunday Night Football game between Atlanta Falcons and New England Patriots. Football Night in America host Mike Tirico spoke with global superstar Justin Timberlake, who was announced earlier this evening as the headliner for the Pepsi Super Bowl LII Halftime Show.

If used, please note the mandatory credit: “In an exclusive interview that aired tonight at halftime of Sunday Night Football.”

Tirico: “So you’ve done this Super Bowl halftime thing before. When they call and say, ‘We want you to be the guy for Super Bowl LII,’ what’s your reaction?”

Timberlake: “Let me think about it (joking)…Immediately, I was excited. It’s a huge moment so I was very excited.”

Tirico: “At any point in the ask, did they say, ‘Hey, just the last time there was a little wardrobe thing. Can we make sure that doesn’t happen? And as long as you’re good with that, were good with you.’”

Timberlake: “(Laughs) That won’t happen this time. There was a little bit of that. But…no, Mike, that’s not going to happen.”

Tirico: “So you know what football people do all the time. Let’s go back and watch the tape, see what we did, try to do it better. Will you go back and watch all the Super Bowl halftimes that have been done before?”

Timberlake: “I’ve already watched a ton of them just to make sure that were not pulling out any gags you know — people are flying, and Lady Gaga jumped from the top of the stadium or something.”

Tirico: “You’re a dad. You’ve got a two year old. You can’t be flying off of stadiums.”

Timberlake: “I know, man. I’ve got to consider these things. When I look back at Super Bowl halftime shows I have participated in, and former ones of other artists like Beyoncé, Bruno (Mars), Coldplay, and then I would say legends like Michael (Jackson) and Bruce (Springsteen). I think the U2 performance, based on what was happening in the world at the time, the hair on the back of my neck stands up just thinking about it.

Now, what I really want to do is take the opportunity to put together a performance that feels like it unifies. I feel like that would be the ultimate accomplishment, and then the icing on the cake is at some point, within that 12 minutes, that everybody is shaking their booty.

I have a goal to make Al Michaels dance. So Al Michaels, if we can get you to shake your booty at the Super Bowl halftime show. By the way, we can start that hashtag — #AlMichaelsShakeYourBooty. That would be the icing on the cake.

So, unity, Al Michaels dancing — what a time to be alive.”