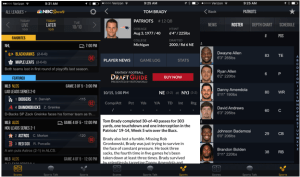 The NBC SPORTS SCORES app, a personalized sports guide that delivers the most up-to-date scores and notifies fans of important upcoming events or moments in sports, launched several new features in its latest update. The app has integrated player cards powered by Rotoworld, the industry-leading source for fantasy news and information, into its schedule and live game features, giving fantasy team owners all of the information they need in one centralized location. The NBC SPORTS SCORES app is available on iOS, and Android.

The new player cards are centered around Rotoworld Player news, giving users quick access to the latest up-to-date news and injury status for their players. Player cards also include biographical data and statistics broken down by game, season, and career. In addition, when accessing the “team” page on the app, fans will now receive Rotoworld-based depth charts and player injury status.

In addition to its proprietary algorithm, NBC SPORTS SCORES introduced a “Pinned Events” tab allowing an editorial team to rate trending, exciting games in real-time so fans never miss a great sports moment. In its SportsTalk feature, the app includes an increased volume of articles and has enabled commenting.

Launched in August 2016, NBC SPORTS SCORES acts as a complement to the thousands of live streams available on the NBC Sports app. The Scores app monitors the world for trending games and, with its powerful personalization and unique alerting capabilities, is able to tell fans when and where to watch that moment online (NBCSports.com and NBC Sports App, WatchESPN, Fox Sports Go, and more) and on TV for more than 25 leagues.

Leahy has been a Professional Hockey Writers Association member since 2013, and has covered six Stanley Cup Finals, nine outdoor games, seven NHL Drafts, five NHL All-Star Games, and the 2016 World Cup of Hockey. A graduate of Nova Southeastern University, he has also contributed to Men’s Health magazine and The Hockey News.

As part of NBC Sports Group’s celebration of the NASCAR playoffs, NBC Sports partnered with Uber to give some riders in Charlotte, N.C. a surprise “racecar” ride.

NBC Sports Group’s coverage of the NASCAR playoffs continues this Sunday at 2 p.m. ET on NBC, with the second race of the Monster Energy NASCAR Cup Series Playoffs Round of 12, from Talladega Superspeedway.

Golf Channel Digital posted its highest quarter of streaming consumption ever during Q3, drawing a total of 192 million minutes (up 77% compared to Q3 2016). It marks the 11th consecutive quarter of year-over-year growth for streaming. Golf Channel Digital also accounted for 305 million page views during the same span, the most-ever for Q3 on record.

NBC Sports Chicago and the Chicago Blackhawks both got off to a strong start for the 2017-18 NHL regular season as the network had the honor of carrying the Blackhawks opener against the back-to-back defending Stanley Cup Champion Pittsburgh Penguins.  The game posted record live streaming numbers in the key metric categories of uniques (11,746), live starts (21,864), and total live minutes (763,992) – all of which set all-time records for an NHL regular season game among all NBC Sports Regional Networks. In a game filled with thrilling action from start to finish, the Blackhawks, led by league superstar Patrick Kane, demolished the reigning champs and their superstar Sidney Crosby in a 10-1 rout.

NBC Sports Regional Networks celebrated the return of the NBA preseason and NHL regular season with hype videos and photos across social media.

NBC Sports Philadelphia dropped the puck to begin the 2017-18 NHL season with the debut of “The New Orange and Black” hype video on Facebook that received more than 2,000 likes and 2,400 shares with nearly 100,000 views. 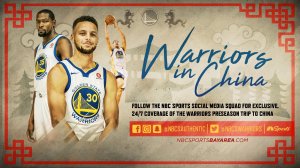 NBC Sports Bay Area’s social media coverage of the Golden State Warriors’ recent trip to China reached over 2.5 million impressions on Twitter and Instagram in three days. One of the most successful posts received 590 retweets and 2,300 likes.