Each All-Star Teacher Award Runner-Up to Receive $2,000 for His/Her School 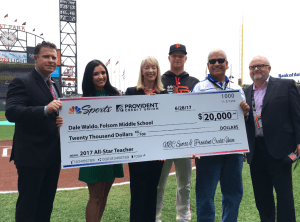 Since its inception in 2007, the All-Star Teacher Award program has donated $180,000 to public schools in Northern and Central California.  For the seventh straight year, NBC Sports Bay Area has teamed up with Provident Credit Union to award the winning teacher’s school $20,000, up from $10,000 in past years.

About Provident Credit Union:
Provident Credit Union is a $2.3 billion financial institution with over 108,000 members and 19 community branches in the Bay Area. The Redwood Shores-based credit union has proudly served the Bay Area since 1950. The full-service credit union offers everything from checking and savings accounts through mortgages, auto loans, mutual funds and home and auto insurance.  Provident began as the California Teachers Association Credit Union and expanded over the years to include those who live and work in the surrounding counties of the Bay Area and beyond. More information is available at www.providentcu.org.