STAMFORD, Conn. – January 24, 2017 – With the movie capital of the world hosting the NHL’s biggest stars, NBC Sports is rolling out its biggest NHL All-Star Game engagement plan ever with “Hockey Goes Hollywood.” The multi-platform campaign weaves together this year’s NHL All-Stars with the glitz and glamour of Hollywood moviemaking, and many of Los Angeles’ world famous landmarks.

The 2017 Honda NHL All-Star Game will be played at Staples Center in Los Angeles, Calif., on Sunday, January 29, at 3:30 p.m. ET on NBC. Originally scheduled to be televised on NBCSN, this year’s contest will be the first network-television broadcast of the NHL All-Star Game since 2004.

“This campaign is about bringing the stars and the sport to life authentically through the lens of Hollywood, including the movie life that L.A. is known for, and the movies that people know and love,” said Jenny Storms, CMO, NBC Sports Group. “With the NHL’s Centennial celebration, the game moving to NBC, and spectacle of L.A., we felt this was a special opportunity to bring out the players’ personalities in a unique way, and to give fans even more reason to watch All-Star Weekend.”

The “Hockey Goes Hollywood” plan contains four major content pieces that will come to life across NBC and NBCSN, and as digital and social content:

“Rask” plays off of the iconic “Jaws” poster by showing an intimidating mask-wearing Rask under the tagline, “Just when you thought it was safe to go back on the ice.” 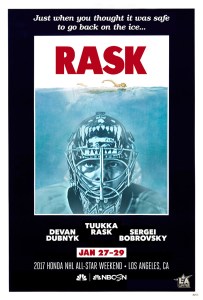 Substituting palm trees for corn stalks, “Rink of Dreams” shows Ovechkin in his Capitals uniform under the tagline, “If you freeze it, we will skate.” 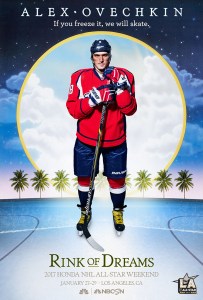 Cast in black and white except for large red letters that spell “Sidney,” this photo of a uniformed Crosby is a dead ringer for the iconic Scarface poster. 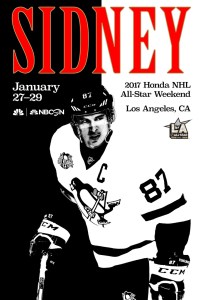 Crosby, McDavid, Montreal Canadiens G Carey Price, and Nashville Predators D K. Subban stare out from above a Zamboni in their best “Fast & Furious” imitation. “Ice is thicker than water,” reads the copy. 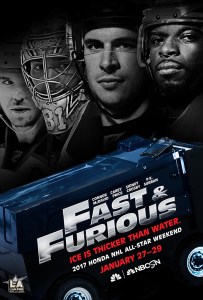 In addition to NBC Sports platforms, all NBC Sports NHL All-Star Game marketing content is being provided to the NHL and its teams for distribution on their respective outlets.