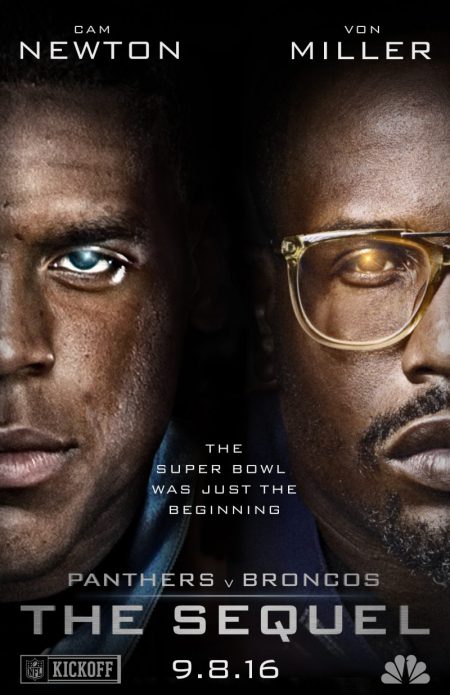 STAMFORD, Conn. – September 7, 2016 – NBC Sports kicks off its coverage of the 2016 NFL season with a blockbuster weekend featuring all four teams from last season’s NFC and AFC Championship Games. It all begins tomorrow, September 8, on NBC, when Super Bowl 50 MVP Von Miller and the defending champion Denver Broncos play host to Cam Newton and the Carolina Panthers at Sports Authority Field at Mile High in NFL Kickoff 2016 in a rematch of last year’s Super Bowl. Coverage begins with a special edition of Football Night In America – the most-watched weekly studio show in sports – at 7:30 p.m. ET. Three days later, NBC Sports opens its 11th season of Sunday Night Football on September 11, when Carson Palmer and the Arizona Cardinals face Jimmy Garrapolo and the New England Patriots at University of Phoenix Stadium in Glendale, Ariz. Coverage starts with Football Night at 7 p.m. ET on NBC.

The Broncos begin the defense of their Super Bowl 50 win tomorrow night at home with QB Trevor Siemian at the helm, following the retirement of Peyton Manning. Denver returns many of its offensive weapons, including WRs Demaryius Thomas and Emmanuel Sanders, and RB C.J. Anderson, as well as a defensive unit that allowed the NFL’s fewest yards per game in 2015. The Panthers success will run through Cam Newton, who won the league’s MVP award last season, amassing 45 total touchdowns. Denver’s defense was able to limit Newton to 265 passing yards and an interception in the Broncos’ 24-10 win in Super Bowl 50.

The Patriots and Cardinals look to build off of 2015 campaigns that concluded in losses in their respective conference championship games. Jimmy Garrapolo will start the year at quarterback for the Patriots, as Tom Brady serves a four-game suspension. Last year, Arizona QB Carson Palmer set career highs in touchdowns (35) and passing yards (4,671). The Cardinals won the most recent meeting between the two teams in 2012 by a score of 20-18 at Gillette Stadium.

NBCSports.com and the NBC Sports app will offer fans a free pass to live stream NBC’s presentation of Panthers-Broncos on NFL Kickoff 2016, allowing consumers streaming access to the game without being prompted to log in with their cable/satellite/telco credentials.  This offering will drive awareness to TV Everywhere on NBCSports.com and the NBC Sports app, where authenticated pay-TV subscribers will be able to live stream all Sunday Night Football and Thursday Night Football games to desktops, tablets, and connected TVs throughout the season.

The sixth season of Emmy-nominated NFL Turning Point, NBCSN’s weekly show co-produced by NFL Films, will debut Wednesday, Sept. 14 at 9 p.m. ET, and will be hosted by Football Night in America’s Dan Patrick. The half-hour program will air throughout the NFL season and will focus on the crucial “turning point” moment in several games each week by utilizing NFL Films’ unmatched cinematography, and sideline and on-field audio.

Mike Florio brings fans the latest NFL news and interviews with players and coaches every weekday morning with Pro Football Talk on NBCSN at 7 a.m. ET.  The two-hour Pro Football Talk provides all-encompassing coverage of the NFL, including the most current news and analysis, thought-provoking debates, and interviews with a wide variety of NFL newsmakers. The program is a simulcast of Florio’s national radio program that airs daily on NBC Sports Radio.

Emmy and Tony Award-winner Kristin Chenoweth, who will star in NBC’s presentation of “Hairspray Live!” on December 7, will perform the national anthem prior to coverage of the Patriots-Cardinals Sunday Night Football showdown. “Hairspray Live!” is the latest of NBC’s live musical productions, which have included “The Wiz Live!,” “Peter Pan Live!,” and “The Sound of Music Live!”

Chenoweth, whose latest album “The Art of Elegance” is due to be released on September 23, owns credits in musical theatre, film and television. She won a Tony Award for Best Featured Actress in a Musical in 1999 for her performance as Sally Brown in “You’re a Good Man, Charlie Brown” on Broadway. In November, Chenoweth returns to the Broadway stage in “My Love Letter To Broadway.”

Chenoweth has also received Best Actress Tony Award nominations for both “Wicked” (2004) and “On the Twentieth Century” (2015). Her acting credits include roles in TV series “Pushing Daisies” (Emmy Winner) and “The West Wing” and feature films “Stranger Than Fiction” and “The Peanuts Movie.”

The open makes its television debut this Sunday before the kickoff of Patriots-Cardinals on NBC’s Sunday Night Football. Underwood is joined in the show open by 12 NFL players, who have accounted for 41 Pro Bowl selections, seven Super Bowl rings, and eight first-round draft picks. Following is the complete list of the players:

SUNDAY NIGHT FOOTBALL ALL-ACCESS: For the seventh straight season NBCSports.com is providing a destination for fans dedicated to behind-the-scenes and social media driven content on the Sunday Night Football All Access page. Fans can follow the social conversation and access content around Sunday Night Football and the SNF Bus, including video highlights from the SNF Bus, player interviews and more. Fans can show their passion for who they think will win each week, use an interactive map to see how other football fans across the country are talking about that SNF matchup, and vote on which team’s hype video they like the best each week. Visit SNF All-Access at: http://snfallaccess.nbcsports.com/

As NBC – the only network with two primetime NFL packages – celebrates NFL Kickoff 2016, NBC Sports Group’s Sunday Night Football bus returns this week to travel the country, visiting the host cities of select Sunday Night Football and Thursday Night Football games. This season, fans will get a closer look at behind-the-scenes action of SNF broadcasts on the bus, which will take fans from the field, to the studio and in the production trucks. Features of the bus include an interactive replica of the control room, a replica of the Football Night in America desk, life-size “Photo Bomb” wall, and more.

The bus will arrive in each city two to three days prior to the game, making stops at local landmarks and events before heading to the game site. Once at the stadium, the Sunday Night Football bus will give fans the opportunity to interact with America’s most-watched primetime television show with exclusive activities, memorabilia and a 55-inch monitor housing social media elements.

Click here for more information on the SNF bus.

To listen to a live stream of NBC Sports Radio, or find your local affiliate, visit http://www.NBCSportsRadio.com.

NBC Sports Regional Networks, which serve top NFL markets such as New York, Boston, Philadelphia, Baltimore, Washington, D.C., Chicago, and San Francisco, will surround the 2016 NFL season with in-depth news, analysis and original programming on the local teams that matter most in more than 50 million U.S. cable and satellite households.

SNF IS TV’S NO. 1 PRIMETIME PROGRAM FOR 5 YEARS RUNNING

For a historic five consecutive Sept.-May television seasons, NBC’s Sunday Night Football finished as television’s No. 1 primetime show in household rating (13.0) and viewership (22.5 million average), as well as the coveted Adult 18-49 demographic (8.0), based on live plus same day data from The Nielsen Company (September-May). Sunday Night Football is one of only four shows since 1950 to rank No. 1 in primetime for five consecutive TV seasons.