SNF Bus Journeys Across the Country to Bring Fans Closer to America’s No. 1 Primetime TV Show

STAMFORD, Conn. – September 6, 2016 – As NBC – the only network with two primetime NFL packages – celebrates NFL Kickoff 2016, NBC Sports Group’s Sunday Night Football bus returns this week to travel the country, visiting the host cities of select Sunday Night Football and Thursday Night Football games. This season, fans will get a closer look at behind-the-scenes action of SNF broadcasts on the bus, which will take fans from the field, to the studio and in the production trucks. Features of the bus include an interactive replica of Sunday Night Football’s control room, a replica of the Football Night in America desk, life-size “Photo Bomb” wall, and more.

The full schedule for this week’s destinations:

ABOUT THE SUNDAY NIGHT FOOTBALL BUS

The bus will arrive in each city two to three days prior to the game, making stops at local landmarks and events before heading to the game site. Once at the stadium, the Sunday Night Football bus will give fans the opportunity to interact with America’s most-watched primetime television show with exclusive activities, memorabilia and a 55-inch monitor housing social media elements. 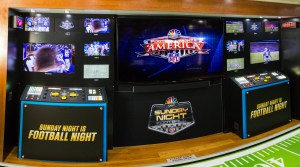 The inside of the 45 ft.-long bus brings fans from the field to the studio set and for the first time, in the production trucks. The 2016 bus features football field decaling on the floor, an interactive control room replica that allows fans a taste of how the broadcast comes to life, and replica of the Football Night in America studio where fans can grab a mic, and act as “special correspondents” for photos. From the life-size NFL players and Carrie Underwood on the outside, to the life-size “Photo Bomb” wall featuring NFL players, fans will have numerous opportunities to interact and share memories from the bus. 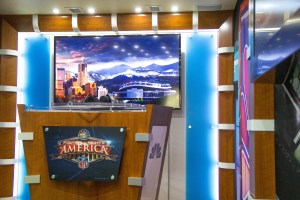 Following each Sunday night game, the stars of the game will autograph the 2016 “Players of the Game Sunday Night Football,” which will be displayed on a photo wall in the bus – complete with a stadium backdrop – alongside the football signed by the 2015 SNF players of the game. In addition, a photo of each 2016 SNF Player of the Game will be added to the SNF schedule display on the outside of the bus throughout the season.

THE SUNDAY NIGHT FOOTBALL BUS BY THE NUMBERS

The Sunday Night Football bus also incorporates social media inside and out, with SNF’s Facebook, Twitter and Instagram accounts along with the #SNF hashtag displayed on the exterior. 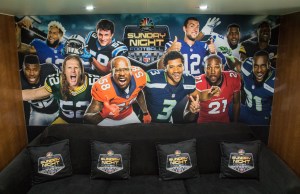 Fans can follow the social conversation and access content around Sunday Night Football and the SNF Bus at NBCSports.com/SNFAllAccess, with video highlights from the SNF Bus, player interviews and the game. Fans can show their passion for who they think will win each week and use an interactive map to see how other football fans across the country are talking about that SNF matchup. In addition, fans can vote on which team’s hype video they like the best.