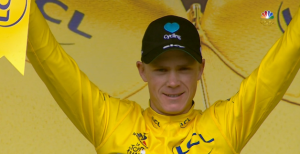 Final Stage Live This Sunday at 10 a.m. ET on NBCSN

STAMFORD, Conn. – July 22, 2016 – NBC Sports Group’s more than 250 hours of live, primetime, and encore coverage of the 103rd Tour de France continues tonight at 8 p.m. ET with Tour Primetime on NBCSN. Tonight’s Tour Primetime features a look at the most compelling action of Stage 19, from Albertville to Saint-Gervais, with new analysis, interviews, and updates.

NBC Sports Group’s live coverage of the 103rd Tour de France culminates this Sunday, July 24, at 10 a.m. ET on NBCSN with the Tour de France Pre-Race Show, immediately followed by Stage 21 from Chantilly to Paris. NBC will present a recap show of Stage 21 on Sunday at 2 p.m. ET

BROKEN SPOKES – BEHIND THE TOUR WITH STEVE SCHLANGER: Throughout the Tour, NBCSports.com will feature daily, online-only, video features entitled Broken Spokes: Behind the Tour with Steve Schlanger. NBC Sports Group veteran reporter Schlanger will take viewers behind-the-scenes to learn what it takes to cover the grueling, 21-stage race, while also highlighting the beauty of the French countryside, the passionate fans, and the knee-deep mountain mud. Click here for the latest Broken Spokes video, in which Schlanger speaks with the cycling “Devil,” who makes appearances at the major climbs in the most significant cycling races in the world.

EVER WONDER?: The latest Ever Wonder? video takes a look at how time gaps are calculated at the Tour de France. Click here to view the video.