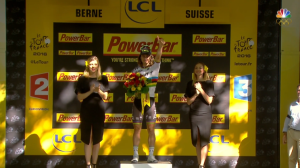 STAMFORD, Conn. – July 18, 2016 – NBC Sports Group’s more than 250 hours of live, primetime, and encore coverage of the 103rd Tour de France continues tonight at 8 p.m. ET with Tour Primetime on NBCSN. Tour Primetime airs each weeknight during the Tour de France and features a look at the day’s most compelling action with new analysis, interviews, and updates.

Tour de France coverage continues tomorrow, Tuesday, July 19, at 8 a.m. ET on NBCSN with a “Rest Day” show featuring a look back at the first 16 stages of the 103rd Tour.

Reporter Steve Porino spoke with Tinkoff owner Oleg Tinkov after Peter Sagan’s stage win this afternoon. Click here for a link to the video, and following is a transcript of the interview:

Porino: “I think it was you that said after Stage 2, if Peter [Sagan] wins two more, you would stay in the sport of cycling.  So can we see you in the future of cycling?”

Tinkov: “Oh in the future for sure, definitely.  But, I am not sure about next year.  I’m afraid Peter has already signed with Bora [Bora–Argon 18] or something.  I think he signed with Bora.  And now it’s too late for me, and as far as I know he signed for even more money. Some strange teams like Trek [Trek Segafredo] and Cannondale [Cannondale–Drapac] accused me of inflating salaries, but, in fact, he [Sagan] signed for even more money than I am paying him now. That means that I am not inflating.  And this [NBCSN] is an American channel, so I would like to suggest that the owners of Cannondale and Trek choose better managers. Call me or my manager Stefano Feltrin and get a better contract.  Because, what they’re doing now is like Mickey Mouse teams.  For such huge brands, big American cycling brands, they do nothing.  I’ve done more in professional cycling in three years, and built a better cycling team than Cannondale and Trek have 10 years.  That’s a shame for American bicycle production.”

BROKEN SPOKES – BEHIND THE TOUR WITH STEVE SCHLANGER: Throughout the Tour, NBCSports.com will feature daily, online-only, video features entitled Broken Spokes: Behind the Tour with Steve Schlanger. NBC Sports Group veteran reporter Schlanger will take viewers behind-the-scenes to learn what it takes to cover the grueling, 21-stage race, while also highlighting the beauty of the French countryside, the passionate fans, and the knee-deep mountain mud. Click here for the latest Broken Spokes video, in which Voigt details what kind of music used to get him pumped up for a race.