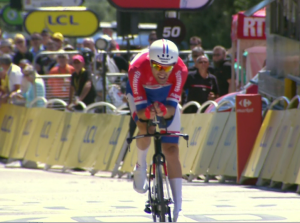 STAMFORD, Conn. – July 15, 2016 – NBC Sports Group’s more than 250 hours of live, primetime, and encore coverage of the 103rd Tour de France continues tonight at 8 p.m. ET with Tour Primetime on NBCSN. Tour Primetime airs each weeknight during the Tour de France and features a look at the day’s most compelling action with new analysis, interviews, and updates.

Tonight’s Tour Primetime will feature coverage of Stage 13, a time trial from Bourg-Saint-Andéol to La Caverne du Pont-d’Arc, and interviews with yellow jersey holder Chris Froome (Team Sky), Stage 13 winner Tom Dumoulin (Team Giant-Alpecin), and Adam Yates (ORICA–BikeExchange). Although race leader Froome finished second in today’s stage with a time of 51 minutes and 18 seconds, he extended his overall lead in the Tour to 1 minute and 47 seconds.

Live weekend coverage continues this Sunday, July 17, at 6:30 a.m. ET on NBCSN with the Tour de France Pre-Race Show, followed by Stage 15 from Bourg-en-Bresse to Culoz at 7 a.m. ET.

BROKEN SPOKES – BEHIND THE TOUR WITH STEVE SCHLANGER: Throughout the Tour, NBCSports.com will feature daily, online-only, video features entitled Broken Spokes: Behind the Tour with Steve Schlanger. NBC Sports Group veteran reporter Schlanger will take viewers behind-the-scenes to learn what it takes to cover the grueling, 21-stage race, while also highlighting the beauty of the French countryside, the passionate fans, and the knee-deep mountain mud. Click here for the latest Broken Spokes video, in which Voigt details what kind of music used to get him pumped up for a race.