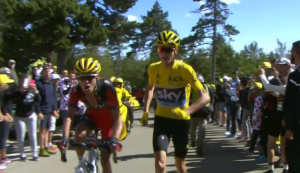 Tour Primetime Tonight at 8 p.m. ET on NBCSN to Feature Interviews with Chris Froome and Richie Porte After Their Stage 12 Crash

STAMFORD, Conn. – July 14, 2016 – NBC Sports Group’s more than 250 hours of live, primetime, and encore coverage of the 103rd Tour de France continues tonight at 8 p.m. ET with Tour Primetime on NBCSN. Tour Primetime airs each weeknight during the Tour de France and features a look at the day’s most compelling action with new analysis, interviews, and updates.

Tonight’s Tour Primetime will feature coverage of Stage 12 from Montpellier to Mont Ventoux, and includes interviews with yellow jersey holder Chris Froome (Team Sky), Richie Porte (BMC Racing Team), and Bauke Mollema (Trek-Segafredo), who were involved in a chaotic crash at the end of today’s race. Following the incident, Froome was forced to abandon his bike and continue on foot until he was provided a replacement. Froome was in danger of losing the yellow jersey as a result of the crash, but received a time adjustment and remains the race’s overall leader.

NOTES & QUOTES FROM COVERAGE OF STAGE 12

Due to fans crowding the course, Richie Porte (BMC Racing Team) crashed into a motorbike in the final kilometer of Stage 12, causing a collision with Chris Froome (Team Sky) and Bauke Mollema (Trek–Segafredo).

Phil Liggett on the decision made by race referees: “The judges had to take the decision they took, there was no alternative. It was a case of false measure. The problem is the crowd stepped into the path of the motorbike and stopped the Tour de France. At that point, I think you had to take the time and you had to be completely fair. I can’t blame Bauke Mollema. He was doing what you would do. You grab your bike and go for it. He wasn’t trying to gain on anybody, he was trying to finish, but I think what they’ve done is absolutely the right way to go.”

Paul Sherwen on the time adjustment made for riders in the crash: “The overall standings now accurately represent what the riders went through. Who was strong, who was dropped, who was attacking. That was Froome, Mollema and Porte. They’ve all been moved up in the standings, I think that’s the way the results should be.”

Christian Vande Velde on the crowds: “This is the pinnacle of our sport. It is what makes the sport amazing, but at the same time we need to make it a little less spectacular. It’s already crazy, it’s already dangerous. Let’s make sure those riders are safe and let’s make sure it’s still sport at the end of the day.”

Liggett on Froome heading up the course on foot: “This is unbelievable…. you have to carry your bike, not just go up for a country hike in the lanes of Mont Ventoux!”

Sherwen on the incident: “This I have never, ever seen before…talk about drama.”

Todd Harris: “There will be fireworks all over France tonight celebrating Bastille Day, but we got an early preview, fireworks in the middle of the day.”

BROKEN SPOKES – BEHIND THE TOUR WITH STEVE SCHLANGER: Throughout the Tour, NBCSports.com will feature digital-exclusive videos entitled Broken Spokes: Behind the Tour with Steve Schlanger. NBC Sports Group veteran reporter Schlanger will take viewers behind-the-scenes to learn what it takes to cover the grueling, 21-stage race, while also highlighting the beauty of the French countryside, the passionate fans, and the knee-deep mountain mud. Click here for the latest Broken Spokes video, in which Voigt details what kind of music used to get him pumped up for a race.