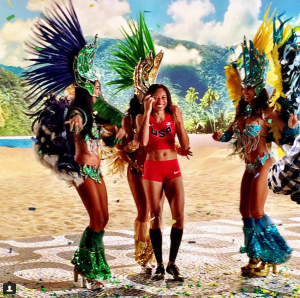 NBC Olympics recently launched its Snapchat account to give fans a behind-the-scenes look at the massive joint effort between NBC Sports and the USOC to capture marketing and social media content this week that will be used in advance of the 2016 Rio Olympics. Over the course of five days, 16 NBCUniversal divisions or programs will capture content from more than 100 Team USA athletes, who will be conducting interviews, posing for photo shoots, changing wardrobes, and interacting with samba dancers (like four-time Olympic gold medalist Allyson Felix is in the photo above), comedians, supermodels and puppies. Although full length content is still under wraps, fans can get a special sneak peek at some of the fun content being created by adding NBCOlympics on Snapchat or via the dedicated #RoadtoRio hashtag on Twitter, Facebook and Instagram right now.

For the second consecutive month, the Yahoo Sports – NBC Sports Network delivered its best month ever to rank No. 2 among all sports digital sites in October with 81 million unique users, according to multiplatform data released by comScore.

NBC Sports Group’s digital properties also had their best month ever, delivering 52 million unique users, up 57% versus the prior year. Additional highlights include:

As previously announced, to gear up for the NASCAR Sprint Cup and XFINITY Series Championships from Homestead-Miami Speedway this weekend, the NBC Sports Digital and Social Media teams are deploying around-the-clock coverage across all of NBC Sports Digital’s platforms this week. 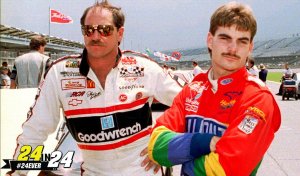 SOCIAL MEDIA: NBC Sports’ social media accounts will make sure every fan has an “all access” pass to this week’s festivities and Championship races in South Florida.

In celebration of Jeff Gordon’s final career race, the NBC Sports Social Media team created a six-second Vine utilizing a photo from every one of Gordon’s 93 wins, available here. NASCAR on NBC is also throwing a #24in24 “throwback Thursday” celebration – during which from midnight to midnight today, NBC Sports Social Media will release a different throwback photo of the No. 24. every hour; will incorporate custom graphics and images featuring quotes from Gordon in its posts; and more.

NBC SPORTS LIVE EXTRA: In an unprecedented offering, NBC Sports Group will present dual national coverage of the 2015 NASCAR Sprint Cup Championship race from Homestead-Miami Speedway at 3 p.m. ET on November 22. NBC Sports Live Extra will allow users to stream both the primary broadcast of Jeff Gordon’s quest to close out his Hall of Fame career in storybook fashion on NBC, and the simultaneous live feed dedicated to each of the Championship 4 drivers racing for a historic victory Sunday on NBCSN in South Florida. Click here for more information.

WE LIVE PHILLY SPORTS on CSNPhilly.com

Comcast SportsNet Philadelphia is taking their mantra – WE LIVE PHILLY SPORTS – and using it to engage fans through social media. Fans can show how they “LIVE PHILLY SPORTS,” and get their favorite photos up on digital billboards all over the Philadelphia area by posting a photo to Instagram, tagging @CSNPhilly and using the hashtag #iLivePhillySports.  The best photos will be selected to run on digital billboards in the coming weeks.  This initiative provides Comcast SportsNet with a unique way to continue the upward growth of the @CSNPhilly Instagram account, which has added 8,000 followers during the past 10 months.

Joe Posnanski examines the MLB Manager of the Year award and why Ned Yost has never received a first-place vote. Click here for the long-form story on NBC SportsWorld.

Posnanki also writes about how Peyton Manning went from MVP two years ago to a stuggling quarterback this season. Click here for the long-form story on NBC SportsWorld.